All Bucks County Free Library Branches are Open.
To find answers to common questions about library services during the COVID-19 Pandemic, please take a look at our FAQ: buckslib.org/covidfaq

Star Wars Day (May 4th) is almost upon us and if you are strong enough to pull the ears off a Gundark, we have exactly what you are looking for and all of it is just 12 parsecs away with your trusty library card.

If you are a young Padawan and just starting to venture out into the Star Wars Universe, do not worry. You will not be judged by your size. May we recommend Geof Smith’s Everything I Need To Know I Learned From A Star Wars Little Golden Book, an inspirational collection of Little Golden Book adaptations of classic Star Wars storylines featuring full-color illustrations of epic scenes from the entire saga.

END_OF_DOCUMENT_TOKEN_TO_BE_REPLACED

When bedtime rolls around it can feel like a never-ending process…baths, teeth to be brushed, pajamas, and then storytime. Doesn’t it feel like the kids always pick the longest book ever? Why not make storytime fun for you as well by reading the following books together? END_OF_DOCUMENT_TOKEN_TO_BE_REPLACED

April is Autism Awareness Month. This annual celebration “represents an excellent opportunity to promote autism awareness and acceptance.” In honor of Autism Awareness Month, we’ve put together a list of books that includes titles about neurodiversity, as well as titles that will help children cope with childhood fears.

END_OF_DOCUMENT_TOKEN_TO_BE_REPLACED 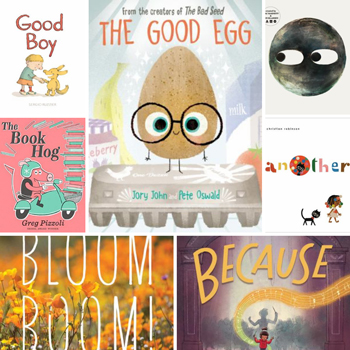 April is a month full of celebrations including National Poetry Month. It’s also the Month of the Young Child, when we focus on the benefits of early childhood programs and services. In honor of this annual celebration, we’ve selected seven picture books that are perfect for reading aloud to the young children in your life — over and over again. END_OF_DOCUMENT_TOKEN_TO_BE_REPLACED

National Library Week is April 7 to 13. This annual observance, highlighting the contributions of our nation’s libraries and library workers, has been celebrated for more than 60 years! Let’s start the celebration by highlighting books featuring our favorite subject: libraries. This list includes mysteries, romances, and true tales from the front lines of library work.

Summer Hours at the Robbers Library by Sue Halpern

Kit, the isolated head librarian of Riverton, New Hampshire’s public library, finds herself drawn out of her shell by teenage Sunny, sentenced to community service for shoplifting, and former Wall Street hotshot Rusty. A quirky collection of library regulars rounds out the cast as the three come to terms with their pasts and find happiness.

The Library Book by Susan Orlean

If you haven’t yet read Susan Orlean’s page-turning account of the Los Angeles Public Library and the catastrophic 1986 Central Library Fire, add it to your TBR pile. It received critical and popular acclaim and is a can’t-miss title for library lovers.

The Library of Lost and Found by Phaedra Patrick

Timid librarian Martha Storm has spent her life helping everyone around her, but feels invisible herself. But when a strange package prompts her to investigate the mysterious death of her grandmother years before, that seems likely to change.

I Work at a Public Library by Gina Sheridan

Sheridan delivers a collection of strange-but-true tales from her own and other librarians’ experience working on the front lines at the public library. From awkward conversations to unique reference questions, I Work in a Public Library will introduce you to the challenges and joys of public librarians everywhere.

The Undateable by Sarah Title

This first book in Sarah Title’s Librarians in Love series brings all your favorite romance tropes into the library. Librarian Melissa Bernard finds herself suddenly famous after she’s caught rolling her eyes in a viral video of a marriage proposal in her library’s stacks. Romance columnist Colin Rodriguez, unlucky in love himself and with his career on the line, approaches her with a different proposal – he’ll help her find love and get a story out of the deal. You can see where it’s headed, but do you really mind? 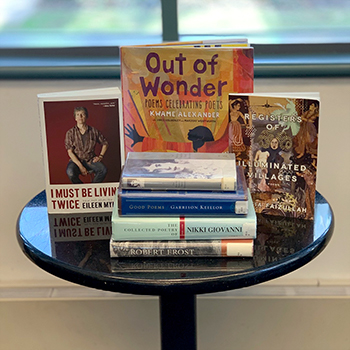 April is National Poetry Month. After checking out this month’s Discovery Studio Poetry Month installation at the Quakertown Branch, you might be inspired to read some poetry. Because we couldn’t possibly begin to recommend every worthwhile book of poetry, here is a brief selection to get you started. From classic to modern, for every age, there is a poem waiting just for you and your head. END_OF_DOCUMENT_TOKEN_TO_BE_REPLACED