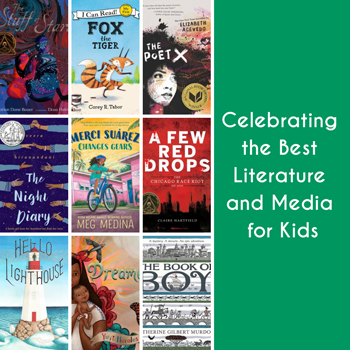 The Oscars, the Emmys, the Tonys, the Grammys…these are world famous award ceremonies viewed by millions. But have you ever heard of the ALA Youth Media Awards?

The American Library Association Youth Media Awards, including the Caldecott, Newbery, Coretta Scott King, and Printz Awards, represent the best literature and media for youth. They are selected by committees composed of librarians and other literature and media experts. Let’s take a look at the 2019 winners.

This award is named in honor of nineteenth-century English illustrator Randolph Caldecott. It is awarded annually to the artist of the most distinguished American picture book for children.

Drumroll, please. This year’s honor goes to Hello, Lighthouse, illustrated and written by Sophie Blackall. It’s a fascinating picture book that tells the story of a dedicated lighthouse keeper and his growing family. The sumptuous pictures and the repeated phrase of “Hello, hello” makes this book a great choice for reading aloud. The book provides a beautiful look back in time with information about lighthouses at the end of the book.

Blackall is the illustrator of the popular Ivy and Bean children’s series and won the 2016 Caldecott Medal for Finding Winnie: The True Story of the World’s Most Famous Bear.

Named for eighteenth-century British bookseller John Newbery, this award is presented to the author of the most distinguished contribution to American literature for children.

And the winner is… Merci Suárez Changes Gears, written by Meg Medina. This book introduces the reader to 11-year-old Merci, descendent of Cuban immigrants, who attends a Florida private school on scholarship with her super smart older brother, Roli. She cycles through life’s challenges with the support of her intergenerational family.

Newberry Honors were awarded to The Night Diary, written by Veera Hiranandani, a realistic fiction book about India and Pakistan as told by a 12-year-old girl through a series of diary entries and to The Book of Boy, the story of a magical quest written by Catherine Gilbert Murdock and illustrated by Ian Schoenherr.

The Coretta Scott King Book Awards are given annually to outstanding African American authors and illustrators of books for children and young adults that demonstrate an appreciation of African American culture and universal human values. The award commemorates the life and work of Dr. Martin Luther King, Jr., and honors his wife, Mrs. Coretta Scott King, for her courage and determination to continue the work for peace and world brotherhood. This award is celebrating its 50th anniversary this year.

A Few Red Drops: The Chicago Race Riot of 1919 by Claire Hartfield, is the King Author Book winner. Hartfield examines a week-long clash between black and white Chicago residents in August 1919 that was sparked by the drowning of a black teenager who, along with his friends, had “trespassed” into the waters of an all-white beach. An angry white man began throwing stones at the boys, striking and killing one. Recommended for ages 12+.

The Stuff of Stars written by Marion Bauer and illustrated by Ekua Holmes, is the King Illustrator Book winner. Poetic language and dazzling illustrations link the big bang to a child’s birth in this striking picture book using the swirls and waves of marbled paper to represent the ebb and flow of cosmic matter.

The Michael L. Printz Award annually recognizes the “best book written for teens, based entirely on its literary merit”.

The Poet X by Elizabeth Acevedo, is the 2019 Printz Award winner. When Xiomara Batista, who pours all her frustrations and passion into poetry, is invited to join the school slam poetry club, she struggles with her mother’s expectations and her need to be heard.

This award, established in 1996, is presented annually to a Latino/Latina writer and illustrator whose work best portrays, affirms, and celebrates the Latino cultural experience in an outstanding work of literature for children and youth. The award is named after Pura Belpré, the first Latina librarian at the New York Public Library. This year the Pura Belpré Author prize was awarded to The Poet X, also winner of the Printz award. Felicidades, Elizabeth Acevedo!

Dreamers, illustrated and written by Yuyi Morales, is the Pura Belpré Illustrator award winner. It is a tale about an immigrant mother and her son who were “unable to understand and afraid to speak…” until they found the public library. The books in the library taught them many things and gave them the confidence they needed to succeed and dream in their new country.

The Geisel (aka Dr. Seuss) Award is given annually to the author and illustrator of the most distinguished American book for beginning readers published in English in the United States during the preceding year. The bronze medal is awarded to the winner for their literary and artistic achievements that demonstrate creativity and imagination to engage children in reading. This award was first presented in 2006.

Fox the Tiger, written and illustrated by Corey R. Tabor is the 2019 winner. This delightful story about being true to yourself features a cute fox who wants to change his image. Readers can enjoy more stories about Fox in two earlier publications, Fox is Late and Fox and the Jumping Contest.

Congrats to all the winners!

Award your child with a trip to the library to checkout some of these great titles!