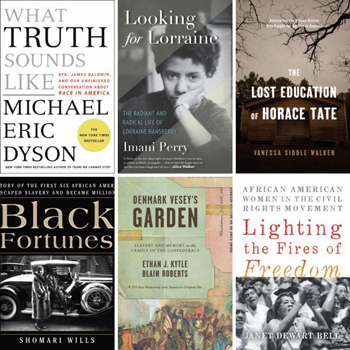 In honor of Black History Month, check out these books highlighting the lives of African Americans and their contributions to American culture, politics, and society.

The astonishing untold history of America’s first black millionaires–former slaves who endured incredible challenges to amass and maintain their wealth for a century, from the Jacksonian period to the Roaring Twenties–self-made entrepreneurs whose unknown success mirrored that of American business heroes such as Henry Ford, John D. Rockefeller, and Thomas Edison. (description from the publisher)

A book that strikes at the heart of the recent flare-ups over Confederate symbols in Charlottesville, New Orleans, and elsewhere, Denmark Vesey’s Garden reveals the deep roots of these controversies and traces them to the heart of slavery in the United States: Charleston, South Carolina, where almost half of the U.S. slave population stepped onto our shores, where the first shot at Fort Sumter began the Civil War, and where Dylann Roof shot nine people at Emanuel A.M.E. Church, the congregation of Denmark Vesey, a black revolutionary who plotted a massive slave insurrection in 1822. (description from the publisher)

During the Civil Rights Movement, African American women were generally not in the headlines; they simply did the work that needed to be done. Yet despite their significant contributions at all levels of the movement, they remain mostly invisible to the larger public. Beyond Rosa Parks, Coretta Scott King, and Dorothy Height, most Americans, black and white alike, would be hard-pressed to name other leaders at the community, local, and national levels. In Lighting the Fires of Freedom Janet Dewart Bell shines a light on women’s all-too-often overlooked achievements in the Movement. (description from the publisher)

Looking for Lorraine by Imani Perry

Lorraine Hansberry, who died at thirty-four, was by all accounts a force of nature. Although best-known for her work A Raisin in the Sun, her short life was full of extraordinary experiences and achievements, and she had an unflinching commitment to social justice, which brought her under FBI surveillance when she was barely in her twenties. While her close friends and contemporaries, like James Baldwin and Nina Simone, have been rightly celebrated, her story has been diminished and relegated to one work-until now. (description from the publisher)

The Lost Education of Horace Tate: Uncovering the Hidden Heroes Who Fought for Justice in Our Schools by Vanessa Siddle Walker

Black educators, in the South especially, have been unsung champions in the quest for justice in American public schools. By tracking the work of Dr. Horace Edward Tate (1920-2002), his Georgia Teachers and Education Association, and similar black educational associations throughout the South, Walker (educational studies, Emory Univ.; Behind Every Movement) paints a portrait of how black teachers networked locally and nationally to advance black students and schools, particularly in the era before the U.S. Supreme Court outlawed racially segregated public schools in 1954. (Library Journal review)

What Truth Sounds Like: RFK, James Baldwin, and our Unfinished Conversation about Race in America by Michael Eric Dyson

Dyson uses the historic 1963 meeting between then attorney general Robert F. Kennedy and a group of black cultural leaders organized by James Baldwin to frame the current state of the black artist in America. Dyson jumps between the two moments of cultural change to look at how the fractured racial landscape of America has morphed over the last 50 years. While he never ignores the echoes of pre-civil rights movement racism, Dyson’s goal is to highlight the artists and activists who continue to bear witness to the messages that Baldwin, Lena Horne, Harry Belafonte, Jerome Smith, and Lorraine Hansberry delivered that day in May. His list of contemporaries includes Jay-Z, Keegan-Michael Key, Jordan Peele, Kamala Harris, Ta-Nehisi Coates, Cornel West, Erin Aubry Kaplan, Patrisse Cullors, Opal Tometi, Alicia Garza, and Colin Kaepernick, among others. (Library Journal review)

This four-volume publication showcases the pride, struggle, and triumph through consequential events and people, covering milestones and challenges met, while highlighting the considerable contributions African Americans have made to the fabric of American society and culture. It provides insights on – and inspiration from – the influence and impact of African Americans on the United States in a broad range of endeavors from politics, education, religion, business, science, medicine, the military, sports, literature, music, dance, theater, art, film, television, and more. (description from the publisher)