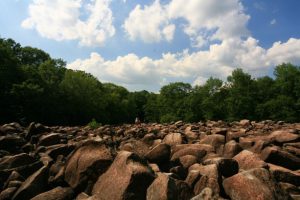 The Atlas Obscura website notes that in 1890 J.J. Ott gave a remarkable concert for the Buckwampum historical society. What made the concert remarkable wasn’t the music being played but the “instrument” Ott was playing. The instrument consisted of stones that made clear, bell-like tones when struck by a hammer. Ott procured the musical rocks from a nearby boulder field in Upper Black Eddy. Known today as Ringing Rocks Park, the rock field occupies seven acres of an otherwise wooded area, and is over 10 feet deep with boulders. Only about a third of the rocks ring, and for a long time it was unclear why the rocks rang at all. However, in 1965 a group of scientists crushed, broke and sliced some of the rocks. After performing numerous tests, they found that while all the rocks do in fact ring, they often do so at tones lower than the human ear can perceive. Interactions between these low tones create any audible sounds. However, the exact mechanism by which they ring still remains elusive, and it may have to do with the freeze-thaw cycle that helped create the boulder field in the first place. So bring your hammers and give it a try yourself! This is truly one of Bucks County’s most unique natural attractions. Looking for more information on Bucks County attractions, history and recreational activities? Check out our collection.